Oceanographers on the island - young generations for a scientific future!

In this blog article EMB Young Ambassador Dr Natalija Dunić talks about the new marine science outreach activities she has been inspired to set up in Croatia. 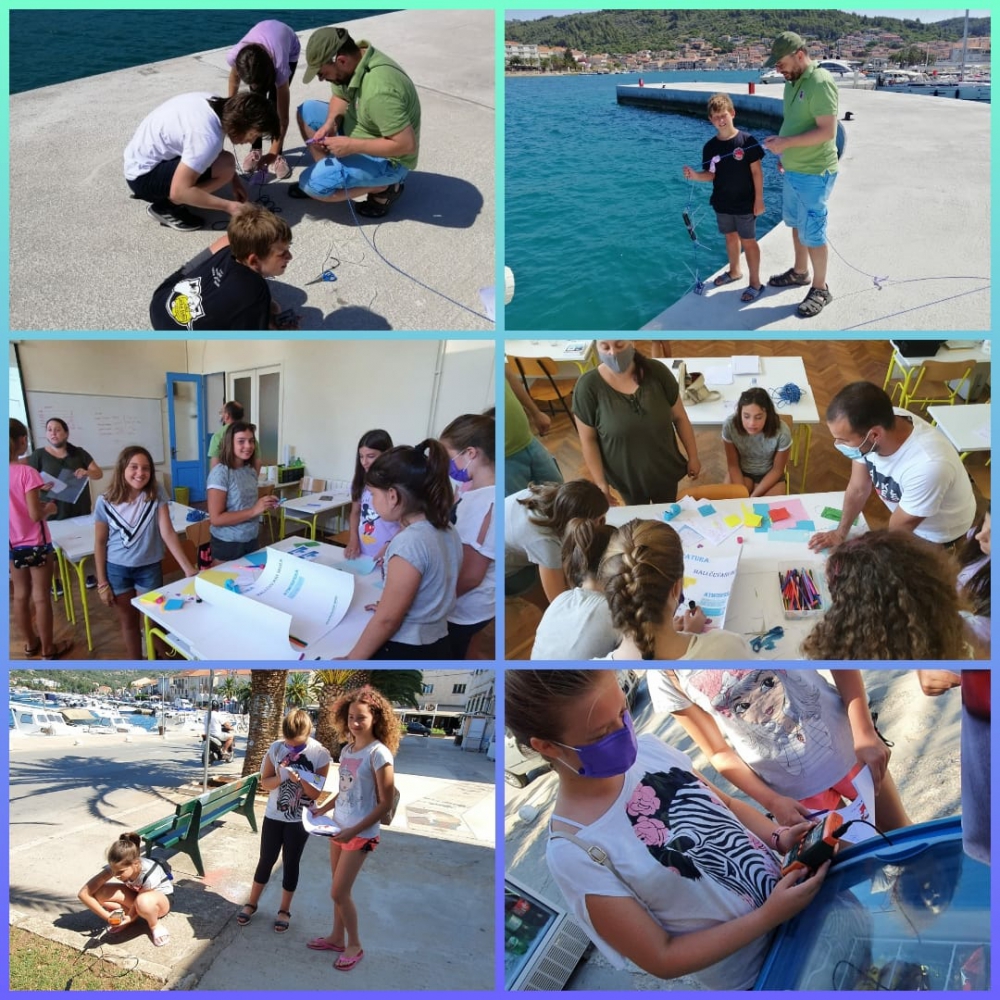 At the end of 2017, among other things, the United Nations declared the period from 2021 to 2030 a decade of ocean science for sustainable development. The idea is simple: "The science we need for the Ocean we want!" In other words, it has already become clear that it is precisely the science that is needed to ensure the sustainable future of our marine world. Given today's lifestyle, the tasks that lie ahead for us researchers of the sea are not easy. Rapid climate change is changing the properties and the dynamics of the sea, which are changing the conditions for marine life, but also the guidelines and focus of future research. It is already clear that we need help in marine sciences in order to find the answer as quickly as possible to effectively adapt to the changes that await us, such as elevated mean sea levels or hypoxia (reduced oxygen levels at the bottom of the sea that kill demersal organisms). On the other hand, it is very important to make humanity aware of the existing consequences of climate change and of the negligence for the environment, as early as yesterday. Although it often seems to us as individuals that there is nothing we can do, this is not true. Simple care for the sea, for the beaches, and finally for the environment, can significantly contribute to the sustainability and the development of the marine world. Each of us who, for example reduce the use of plastic products, and dispose of plastic waste in the right way, can significantly contribute to the health of our seas and save at least one sea creature.

Five young scientists from Split (Croatia) working at the Institute of Oceanography and Fisheries, the Croatian Hydrographic Institute and the Faculty of Science at the University of Split, have recognized these problems today, and in their own way and with their own knowledge want to contribute to marine research and to the awareness of climate change and sustainable development. They decided to use their free time to educate the inhabitants of the Croatian islands (especially children!), to share their experiences and knowledge in sea research and encourage them to think about how they can protect the sea, and thus take action. The choice of extracurricular activities, especially scientific ones, including those related to the sea, is extremely weak on most Croatian islands. And that is a great pity, because these children are most attached to the Adriatic Sea, so they are potential future oceanographers. Precisely because of this, with four of my colleagues who are actively involved in marine research, I also decided to leave my office and go out on a "field trip", to the Croatian islands. Under the group name "Oceanographers on the island", starting from the summer of 2021, together we are organizing three types of activities for the islanders that are free of charge. For the youngest, elementary school students, we are organizing children's workshops called "Young Oceanographers", the goal of which is to stimulate their curiosity and research spirit, to teach them something new, and along the way to get the chance to meet and have fun. Thus, in Vela Luka (island Korčula), we held "hands-on" workshops in a hybrid form, part outdoors where students on the spot learned how to measure sea and air temperature, and other part in the classroom where through their own data analysis, all students came to conclusions about what they measured. Moreover, through additional various experiments, students also learned whether the sea is denser than fresh water and why. Finally, by playing a game, the children made their own "Calendar of Promises", where each student gave his own promise to the sea and to the environment.

For all the locals, we are organizing a social event where we play various board games with the motifs of the sea, which is an ideal opportunity for everyone who wants to come and meet young scientists.

The last activity, called "Adriatic in a café " was created because of our desire to show all citizens of the Republic of Croatia, including our colleagues in science, that scientific research is not a secret. Unlike the classic lectures that scientists often give to each other, Oceanographers on the island go out among the locals, and give popular scientific talks related to recent marine research, especially about the topics that are closest to the locals. Over a drink, guests of the scientific café are called to discuss chosen topics. A scientific café that was held in Vela Luka was on the topic of meteotsunami, a devastating wave that ravaged Vela Luka in 1978, with an amplitude that was above 3 m. The locals had the opportunity to find out firsthand what actually happened and whether such a scenario could be repeated in the near future. I must say, I was surprised that the discussion after the talk stretched far into the night.

This means only one thing: people are eager for these types of events! And they should be organized more frequently all around the world. My wish, as a young scientist, is that you who are reading this blog, find the same thrill and enthusiasm as we did, and try to organize similar events in your country. And you know what? Looking at the smiling faces of young students at the end of the workshops fills your heart with joy, and at that point you know that you have made a difference! Oceanographers on the island have just started, and at the beginning of next month they will be travelling to a new island. Tell us, where will you go?