On Thursday 15 October, EMB hosted its third Science Lunch Webinar on Prehistoric researches on the EU continental shelf, by crossing the boundary between archaeology and marine geology. The webinar was 1 hour long and took place from 13:00 - 14:00 CEST. 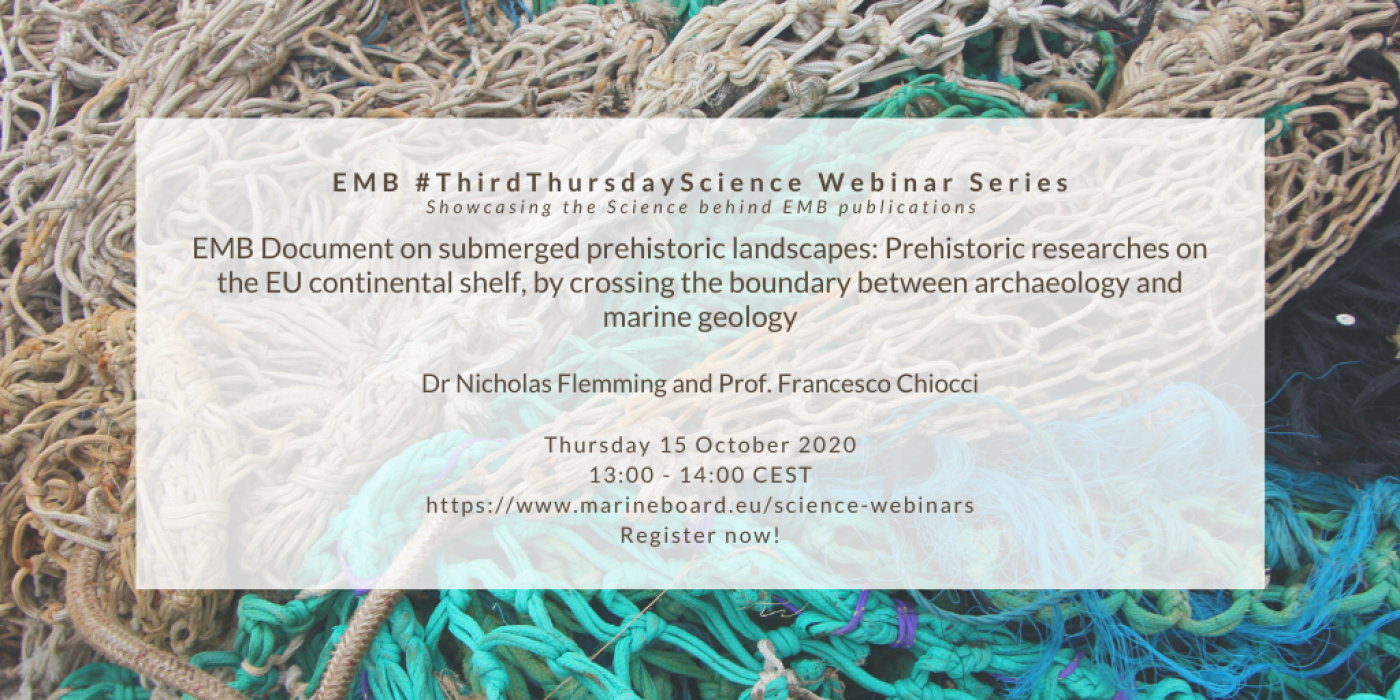 EMB Executive Director Sheila JJ Heymans started off the webinar with a short introduction and then Dr. Nicholas Flemming and Prof. Francesco Chiocci discussed some of their findings on this topic, which were included in the EMB Position Paper n°21 on Prehistoric Underwater Landscapes. After the presentations, there was some time for questions from the participants and a discussion on the topic.

Dr Nic Flemming chaired the working group that wrote the EMB Position Paper 21, “Land beneath the waves: submerged landscapes and sea level” which was known generally as SUBLAND, published in October 2014. Prof. Femming has been studying submerged prehistoric sites for 50 years, and has published many articles and maps on the findings. He was a member of the SPLASHCOS team, and was principal editor of one if its final books “Submerged Landscapes of the European Continental Shelf”, published in 2017. The SUBLAND report, sub-titled: “A joint geoscience-humanities strategy for European continental shelf prehistoric research”, was aimed at convincing governments and heads of agencies and universities that prehistoric archaeology of the continental shelf was a permanent discipline that would require constant attention and funding. Prof. Flemming had previously been Chairman of the UNESCO Committee on International Ocean Data Exchange (IODE), and then Director of the European Office of the Global Ocean Observing System (GOOS) (1994-2001).

His presentation on the impact of the EMB position paper can be found here.

Prof. Francesco Chiocci is a marine geologist with a focus on seafloor mapping, marine geohazard and HR seismic stratigraphy. He is a full professor at the University of Rome Sapienza and was a member of the SUBLAND working group and currently also the co-chair of the working group on Marine Geohazard. He is member chief of the Marine Geology section of the Italian Geological Society, a member of the Italian Oceanographic Commission, and a member of the Steering Council of CoNISMA Consortium. He is responsible for many national and international projects. He has participated in >50 scientific cruises (half of them as chief scientist) and has published some 150 articles in peer reviewed journals and international books. His H-index is 27 and he has 2.350 citations.

His presentation was on Prehistoric researches on the EU continental shelf, by crossing the boundary between archaeology and marine geology.

You can re-watch the webinar on the EMB YouTube Channel.