One of the key tasks of the FP7 STAGES project is to develop a concrete proposal for a science policy interface (SPI) to support implementation of the EU Marine Strategy Framework Directive (MSFD) in the long-term. As part of this process, STAGES is conducting a stakeholder consultation to collect the views and needs of a broad range of MSFD stakeholders from science, industry, civil society, NGOs, and the national MSFD competent authorities and implementing agencies. An extensive on-line questionnaire survey has already been completed and STAGES is now organizing a Stakeholder Consultation Workshop. The workshop is planned as a joint activity with the FP7 DEVOTES project.

The Workshop took place at the Regus Centre in Brussels (Rue de Colonies 11) on 12 February 2014. The programme included a mix of presentations and discussions, including four topic-focused breakout groups. The discussions and views collected will be used to directly inform the development of a STAGES proposal for a durable long-term European SPI to support implementation of the MSFD. Download the programme here 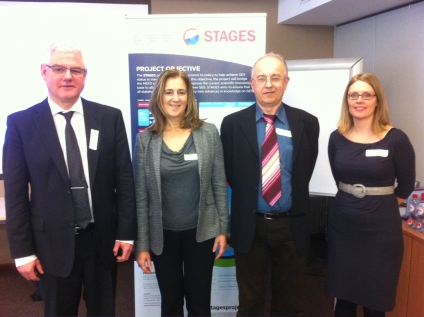