The Ocean is slowly losing its oxygen due to global warming. This is of great concern and there is a need for stronger communication and heightened awareness about the looming threat of deoxygenation. Moreover, the sentence “every second breath you take comes from the Ocean” is often used in science communication, but its scientific foundations are unclear and there is a need to clarify the science underpinning this statement to contribute to its correct use. 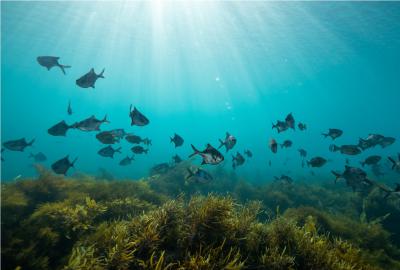 Scientists, science communicators and policy makers often say “every second breath you take comes from the Ocean” or similar to highlight the importance of the Ocean for humans. Despite the widespread use of this phrase, its scientific foundations are unclear and there is growing debate among scientists about the correctness of the sentence. There is therefore a need to clarify the science underpinning the actual connection between the oxygen reservoir in the atmosphere and primary production in the Ocean, including differences in timelines for marine- and terrestrially-produced oxygen.

Increasing our understanding on Ocean Oxygen is also critical due to the looming threat of Ocean deoxygenation. The loss of dissolved oxygen from the Ocean to the atmosphere, also known as Ocean deoxygenation, is one of the most worrying changes occurring in marine ecosystems and yet it is heavily under-communicated. Global warming leads to oxygen loss, both directly and indirectly. Another major source of Ocean oxygen loss is eutrophication as a result of nutrient run-off. The global Ocean oxygen content has decreased on average by ~2 % since the middle of the 20th century. Ocean model simulations predict a decline in dissolved oxygen in the Ocean of 1 to 7% by the year 2100, and comparisons of models and observations suggests that models underestimate the true rate of ocean oxygen. The effects of Ocean deoxygenation are further amplified by Ocean warming and Ocean acidification, as these three major stressors commonly co-occur because they share the common cause of CO2 emissions.

Consequences of Ocean deoxygenation include decreased biodiversity, shifts in species distributions, displacement or reduction in fisheries resources, and changes in biogeochemical cycling. These changes are taking place on such a large scale that experts foresee that they will have implications for the global biochemistry and climate, with a less productive Ocean and a lower capacity of both land and Ocean to serve as carbon sinks. The continued spreading of deoxygenated areas in the Ocean is therefore of great concern, with potentially great impacts on biodiversity and human societies.

This working group provides input to the UN Decade of Ocean Science for Sustainable Development (2021-2030) societal outcome that aims for a healthy and resilient ocean.

Specific topics that could be addressed in relation to the two main objectives could include but are not limited to:

The final output of the WG will be an EMB Future Science Brief to be published in 2023.

The Terms of Reference describing the objectives and operation of the Working Group can be downloaded here.