EMB Science Webinar: The cells of ecosystem functioning: towards a holistic vision of marine space

On Thursday 17 September 2020, Prof. Ferdinando Boero talked about "The cells of ecosystem functioning: Towards a holistic vision of marine space" at EMB's second Science Webinar. This topic was touched upon in EMB's flagship publication "Navigating the Future V". The webinar was 1 hour long and took place from 13:00 - 14:00 CEST. 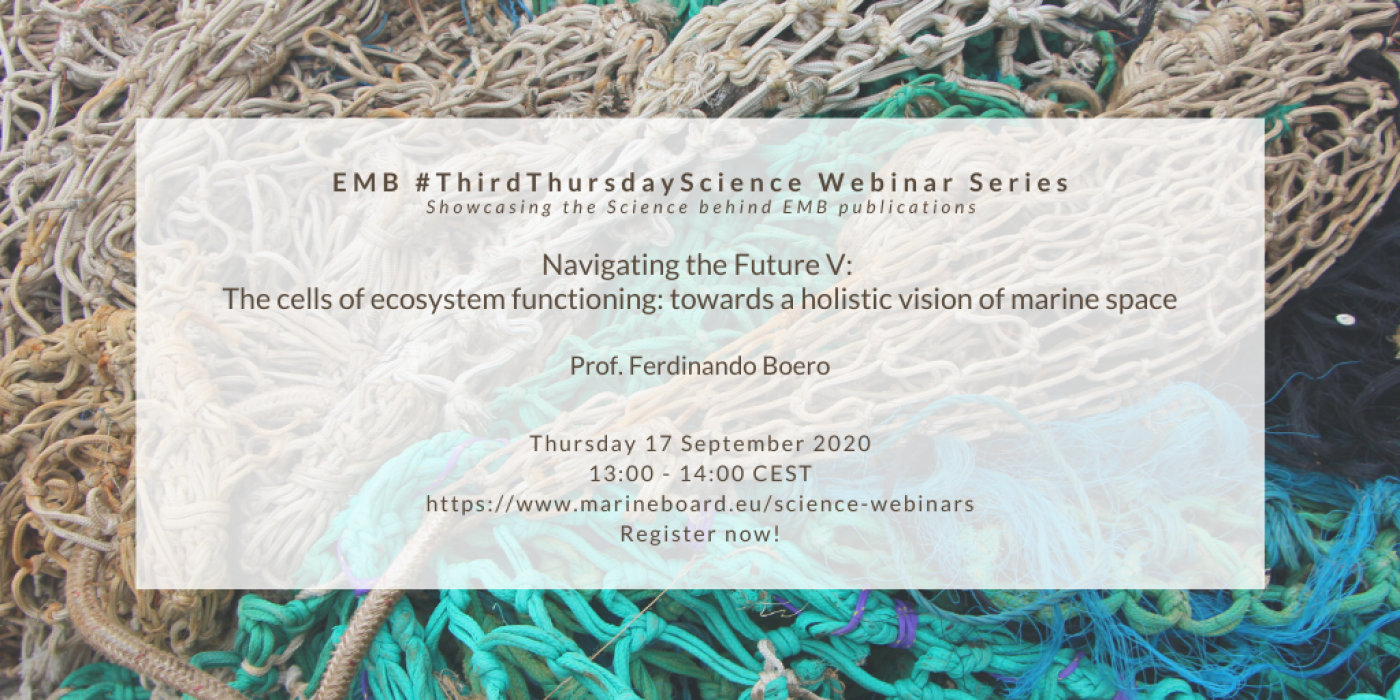 Evolving from a mainly abiotic approach in the Water Framework Directive, the EU marine legislation gradually expanded to include the evaluation of biodiversity patterns of the Habitats Directive, to the Ecosystem functioning approach of the Marine Strategy Framework Directive, then made spatially explicit with Maritime Spatial Planning. The management of human activities towards marine sustainability calls for the holistic understanding of the processes that generate biodiversity patterns, since the persistence of structures is based on the efficiency of functions, and vice-versa.

In this framework, the structural and functional mapping of the marine environment is crucial, requiring the full appreciation of the four dimensions of the ocean, an environment in 3-D that evolves rapidly in time (the fourth dimension) with phytoplankton blooms followed by pulses of secondary and tertiary production, across the intricacies of food webs.

EMB Executive Director Sheila JJ Heymans started off the webinar with a short introduction, and Prof. Boero discussed some of his findings, which were included in Navigating the Future V. After the presentations, there was some time for questions from the participants and a discussion on the topic.

Professor Ferdinando Boero is Professor of Zoology at the University of Naples Federico II, Italy, and Associate to CNR-IAS, Genoa, and to the Zoological Station Anton Dohrn, Naples. As representative of CoNISMa in the European Marine Board, he contributed to Navigating the Future IV and V. He is appointed by the European Academies Science Advisory Council for the preparation of: Marine Sustainability in an age of changing oceans and seas; and Future of the Ocean: impact of human activities on marine systems. He is also a Member of Faculty Opinions and Coordinator of the Ocean of Tomorrow project CoCoNet, on networks of Marine Protected Areas in the Mediterranean and Black Sea and the feasibility of Offshore Wind Farms (involving 22 states in 3 continents).

His research interests include: Marine biodiversity and ecosystem functioning, Marine Conservation, Evolution, Citizen Science, Communication in science. He has received several honours such as the Grand Medaille Albert 1erfor Oceanography of the Institute Océanographique de Paris and Medal of the National Academy of Sciences of Italy for Physics and Natural Sciences.

You can re-watch the webinar on the EMB YouTube channel, and you can find his presentation here.