The European Marine Board Communication Panel (EMBCP) provides a pan-European platform for marine science communicators to promote Marine Board activities, to synergize outreach activities and to advocate for ocean literacy. 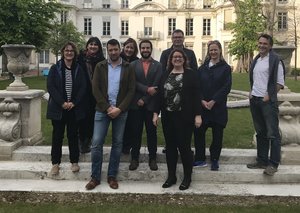 Dissemination, outreach and communication of scientific knowledge is very important in today’s society, where social inclusion is an integral part of environmental protection and sustainable development. This is particularly true for the world of ocean research, a world that is largely hidden from our view, representing an added challenge to the communication of marine research. From its inception, the Ocean Literacy movement has advocated closer interaction between marine scientists, educators and other stakeholders (the public, policy-makers, private sector), and inspired new events and networks all over the world.

CommOCEAN 2022 conference took place as a hybrid event in Sète (France) with several sessions running fully online, ensuring a relevant, challenging and inspiring programme for everyone joining in person or online. The 5th conference was co-organised with the University of Montpellier, Ifremer and MARBEC lab. You can follow the most recent news via Twitter (@CommOCEANConf), Facebook (@commocean) and on the conference website (http://commocean.org/).

EMB has clear procedures and guidelines for selecting the experts forming its Working Groups. To help communicating the science-policy publications yielding from these Working Groups, and increasing the impact of their messages, a EMBCP member is involved in the process and in close collaboration with the desginated Science Officer. This may include advice and collaboration on infographics and briefs, and sharing national contacts and networks to disseminate the EMB publication.

CommOCEAN 2020 conference was a virtual event due to the COVID-19 pandemic. This conference aimed to provide communication skills and inspiration to communicators across a range of experience levels. Many sessions were suitable for all, but some elements of the programme run simultaneously and were tailored for those looking to build their communications skills and to those looking to move their communications to the next level. You can follow the most recent news via Twitter (@CommOCEANConf), Facebook (@commocean) and on the conference website (http://commocean.org/).

The Communications Panel decided in 2019 to write a policy document, under the auspices and with the support of the European Marine Board (EMB). This document would sketch and analyse the state of the art in the field of marine science communication, aiming to highlight marine science communication as a growing and needed field of activity, and providing recommendations towards its future and developing best practices. More information can be found here.

The Communication Panel advised on developing a communication strategy to promote and launch the EMB flagship Navigating the Future V (NFV). Actions included the promotion of the achievements of Navigating the Future IV, the suggestion to develop infographics and short videos on the themes covered by NFV, the building up interest via online channels of the document before the launch, the drafting and dissemination of a press release at the occasion of the launch at the EurOCEAN 2019 conference (11-12 June 2019), which attracted several journalists from press and radio; the development of a video summarizing the launch of NFV, and to continue the dissemination of the themes and achievements after the launch of the document. A report of the main results is available here.

The 1st International Marine Science Communication Conference (IMSCC 2014, 8-9 September, Porto) focused on tools and practices for scientists and marine science communicators to develop their skills and improve dialogue with a range of target audiences including the general public and decision-makers. The concept of a conference dedicated to marine science communication was first proposed by the EMBCP and the conference was jointly organized by CIIMAR (Interdisciplinary Centre of Marine and Environmental Research of the University of Porto), the EMBCP and Ciência Viva (Portuguese National Agency for Scientific and Technological Culture). Presentations and workshops covered a broad spectrum of marine science communication issues including the use of tools such as social media and infographics, tips for dealing with the media and case studies of successful outreach programmes employing best practice.

The EMBCP co-organized the First Conference on Ocean Literacy in Europe in Bruges, Belgium on 12 October 2012. The conference was attended by 110 participants from 15 countries. The programme included high-profile speakers from European and international organizations with a strong interest in ocean education and marine science communication. This event highlighted a crucial need for public support towards achieving a sustainable maritime economy and knowledge-based society.

EMBCP members are appointed by the delegates representing the members of European Marine Board. Members should be from/ affiliated to EMB Member Organizations and based on one membership per organisation.

After the review in 2016 by European Marine Board, the Communication Panel became permanent as it was seen as strategically important for EMB. One of the recommendations was the establishment of a Steering Group (and selecting a EMBCP Vice-Chair as well) which should increase the commitment of EMBCP members, may join the Science Sessions of the EMB plenary meetings, ensure stronger links with EMB (advisors on communication) and other specific tasks or projects (e.g. CommOCEAN, input to Navigating the Future series).