A new EMB publication, Policy Brief 3 entitled “Decommissioning of offshore man-made installation: Taking an ecosystem approach” (pdf), assesses the role of marine science in reducing the environmental impact of decommissioning and highlights the scientific questions that need to be answered to settle the debate on what should be done with these structures. 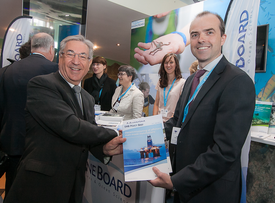 Recent estimates suggest that there are currently around 1,350 oil and gas installations in the North Sea and North Atlantic regions and 1,800 offshore wind turbines in North Sea region alone; and this number is rising. The total cost of full decommissioning of oil and gas installations in the North Sea alone for the period 2015 to 2040 is estimated at between US$70 and US$82 billion. The numbers of installations requiring decommissioning is also set to increase dramatically as renewable energy devices begin reaching the end of their operational life, and as plans for exploiting renewable energy sources in the near future grow. Globally, industry and governments are embracing different decommissioning approaches. Ultimately, appropriate decisions need to be made in the very near future regarding the decommissioning of oil and gas and renewable energy structures. At present, there remains a need for more scientific research to better inform the decision-making process regarding their fate.

The publication was launched at European Maritime Day 2017, in Poole, UK. The EU Commissioner for Environment, Maritime Affairs and Fisheries Karmenu Vella received a copy from the EMB Executive Director, Niall McDonough on 18 May 2017 (picture). Niall McDonough also spoke at a workshop on the subject of involving industry in marine data initiatives entitled “Blue Growth Data Challenge Part 2: Offshore Energy Case Studies”. Held on the afternoon of Thursday 18 May 2017, the workshop was jointly organized by the EU ATLAS project and the INSITE programme, which is featured in the new publication. You can download the Policy Brief here, and the Press Release can be found here.