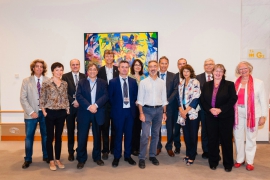 came together with the ocean observing community at the European Parliament in Brussels yesterday (agenda available here) to discuss plans for EOOS (a European Ocean Observing System), a system which aims to unite the existing ocean observation capacity in Europe. The vision for EOOS (presented by Glenn Nolan, Secretary General of EuroGOOS, the European Global Ocean Observing System) is that it will be a coordinating framework designed to align and integrate Europe’s ocean observing capacity in the long-term; to promote a systematic and collaborative approach to collecting sustained information on the state and variability of our seas; and to underpin sustainable management of the marine environment and its resources. In this way, EOOS will bring a real added value to existing observing efforts, empowering those who are working to advance ocean observing in Europe, catalyzing new initiatives in a strategic way, targeting identified gaps and speaking with a wide range of stakeholders. Speakers and panelists discussed the value of ocean observing for Europe, highlighting societal benefits, as well as the existing observation gaps and the bottlenecks that are currently hindering such an observation system. Niall McDonough, Executive Secretary of the EMB, presented a draft consultation document titled ‘Towards an end-to-end, integrated and sustained ocean observing system for Europe’. This document forms the basis for an open stakeholder consultation on EOOS which will be launched in October. An overview of the main outputs of the EOOS event is available online. Picture features speakers and panelists at the European Parliament event hosted by MEP Ricardo Serrao Santos.